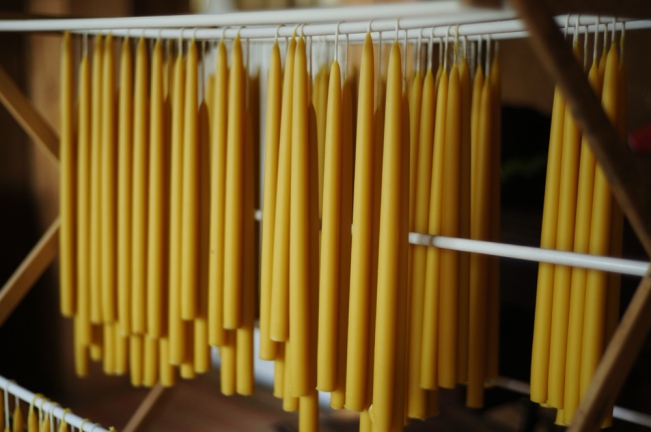 Scented or aromatherapy candles are ubiquitous particularly around the holidays … and some of us use Hanukkah candles. In summary: we recommend that you avoid petroleum bases paraffin candles – use 100% beeswax or organic soy.

What type of wax is generally used in candles?

In 2001 the Environmental Protection Agency concluded that burning paraffin candles emit harmful amounts of toxins in the air that are considered above the excess cancer risk, with multiple exposures.

According to California’s safe drinking water and toxic enforcement act of 1986, there are up to twenty toxins in paraffin candle wax, substances which are found in paint, lacquer and varnish removers.

Petro-soot from paraffin candles gives off the same soot as the exhaust of a diesel engine, and is considered just as dangerous as second hand smoke, causing problems from headaches to lung cancer. Paraffin fumes have been found to cause tumors in the kidneys and liver of lab animals.

In 2005, when the American Lung Association issued a warning to the public about the dangers of paraffin the National Candle Association (NCA) threatened them with legal action. The NCA has also sent letters to others who tried to warn the public.

As was previously noted, paraffin is made from leftover residue of the final petroleum refining process. The wealthy oil industry (which not only sells their by-products to the candle industry but also has four members sitting on the board of the National Candle Association) has assumed a very dominant position in the candle manufacturing business.

Additionally increasing the amount of particulates, volatile compounds, and soot released into the air:

I have used Bluecorn Naturals candles for years.

Soy candles last 50% longer than candles made of petroleum-based paraffin. They also burn slower and cooler (helping to better distribute fragrance), are non-toxic, less likely to trigger allergies, clean up with soap and water, and produce very little soot. Organic soy candles are available, such as Paddywax Ecogreen Upcycled Candle.

Hanukkah is probably one of the best known Jewish holidays, not because of any great religious significance, but because of its proximity to Christmas. Many non-Jews, and even many assimilated Jews, think of this holiday as the Jewish Christmas, adopting many of the Christmas customs, such as elaborate gift-giving and decoration.

The only religious observance related to the holiday is the lighting of candles. The candles are arranged in a candelabrum called a Hanukia. Many people refer to the Hanukia incorrectly as a menorah. The name menorah is used only to describe the seven-branched candelabrum that was housed in the Jewish Temple. The Hanukiah holds nine candles: one for each night, plus a shamash or servant at a different height. On the first night, one candle is placed at the far right. The shamash candle is lit and three berakhot (blessings) are recited: The first candle is then lit using the shamash candle, and the shamash candle is placed in its holder. The candles are allowed to burn out on their own after a minimum of 1/2 hour. Each night, another candle is added from right to left, like the Hebrew language. Candles are lit from left to right because you pay honor to the newer thing first. Read more on Hannukah.

I recommend these 100% Beeswax Hanukkah Candles. You can buy these via our Amazon affiliation.

Do you enjoy lighting candles? Which ones do you like to use?