In a world of soda, be a kombucha. 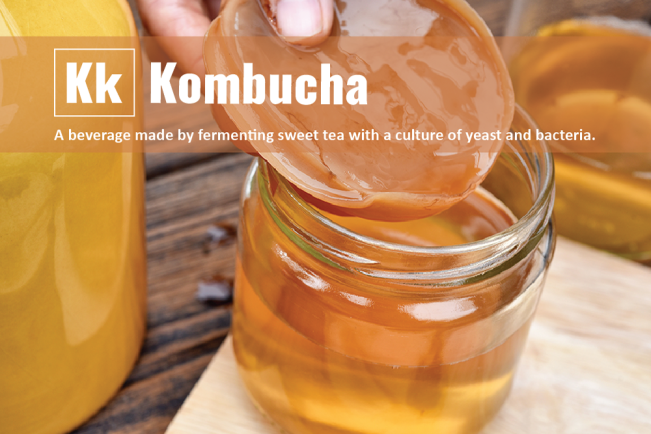 I saw a t-shirt with the words of the title of this post being sold on Amazon! Since I featured kombucha in A Real Food Alphabet, the children’s book I created, I wanted to post more details about it. Sally Fallon Morell writes that kombucha is safe for children to consume, even though it may have a small amount of alcohol in it. She clarifies that “it should be homemade so that it is really sour. Not sweet. A little every day is fine. My grandsons love it.” I also recommend homemade kombucha because it is much more economical, and some kombucha that is available for retail sale is produced in stainless steel vats, whereby the metals such as nickel could leach as the tea ferments.

For those who want to skip ahead to how, and aren’t as interest in the why: My Kombucha Journey: I Love Kombucha Now! includes a recipe and directions. Also, Homemade Mommy published Flavored Kombucha Recipes Your Kids Will Love that I think look delicious!

The Weston A. Price Foundation shares the following background information on kombucha:

Another delicious, refreshing and salutary beverage consumed in Russia is chainyi grib, known in the United States as kombucha, made from tea, sugar and a culture or “mushroom.” Actually, fermented tea is consumed throughout Japan, Poland, Bulgaria, Germany, Manchuria and Indonesia as well as Russia. Other names for the drink are teeschwamm, wunderpilz, hongo, cajnij, fungus japonicus and teewass.

The tea fungus or culture is a symbiotic combination of vinegar-producing bacteria (Acetobacter sp.) with at least two yeasts. The fungus can only form when the Acetobacter and yeasts are present together. When Acetobacter is used alone, gas is produced and the film or culture does not form. The culture transforms sweetened black tea into a slightly fizzy, sour drink, redolent of cider, via a combination of acetic, lactic-acid and glucoronic fermentation. In the process, virtually all the sugar and caffeine are transformed into other compounds.

Kombucha is safe and healthy when prepared according to directions. Bring 3 quarts of water to a boil, remove from heat, add 1 cup of [organic] white sugar and steep with 4 bags of organic black tea. To avoid contamination, the sweetened tea should then be placed in a clean, clear glass bowl and the “mushroom” placed carefully on top. Place a crisscross of masking tape across the bowl and cover with a clean towel. Place in a warm, protected spot for about eight days until the beverage becomes suitably acid.

Some people claim that kombucha is not safe, but when reasonable care is taken, “you’re more likely to find contamination in a cup of coffee than in a cup of properly prepared kombucha,” according to Dr. Samuel Page of the FDA. Of course, if the kombucha develops mold, you should not drink it—just as you would not consume any food that developed mold.

Kombucha is rich in B vitamins and a substance called glucuronic acid which binds up environmental and metabolic toxins so that they can be excreted through the kidneys. Glucuronic acid is a natural acid that is produced by the liver. Kombucha simply supplies the body with more and boosts the natural detoxification process. Glucuronic acid is also the building block of a group of important polysaccharides that include hyaluronic acid (a basic component of connective tissue), chondroitin sulfate (a basic component of cartilage) and mucoitinsulfuric acid (a building block of the stomach lining and the vitreous humor of the eye).

In some cases, consumption of kombucha tea can provoke an allergic reaction. According to some practitioners, this is evidence that the liver is very toxic and cannot handle the detoxification products that the kombucha helps release. In these cases, it is best to begin the detox process using beet kvass, which helps the liver cleanse itself. Usually after two or three weeks of taking 8-12 ounces daily of beet kvass, the kombucha will be well tolerated and can be drunk both for its good taste and medicinal qualities.

Glucuronic acid content usually reaches its maximum on the eighth day, when the pH reaches 2.6. For testing, use pH Hydracid Papers 1-6, which can be obtained through any pharmacy.

Researchers looking at the toxic effects of fluoride have recently raised concerns about kombucha because most commercial tea is very high in fluoride. Fortunately, kombucha made with organic tea contains very little fluoride. We had fluoride levels tested in organic black tea and in the kombucha made with the tea. The levels in the tea were only slightly higher than those in the filtered water from which it was made and actually slightly lower in the kombucha than in the black tea. These results suggest that the process of fermentation actually removes some of the fluoride from the tea and may explain why the kombucha “mushroom” eventually gets black. These older, darkened “mushrooms” can be replaced with the newer, cleaner “babies” that grow on top of the original “mushroom” during the fermentation process.

Chris Masterjohn, PhD, wrote another article that may be of interest: Are Kombucha and Other Fermented Foods Toxic Because of Their Aldehyde Content?

Is kombucha a part of your diet?

5 Responses to In a world of soda, be a kombucha.